Turner played college baseball for the Cal State Fullerton *ans. He was selected in the seventh round of the 2006 MLB draft by the Cincinnati Reds, and made his major league debut in 2009. With the Dodgers, Turner was an All-Star in 2017, and won the 2017 National League Championship Series Most Valuable Player Award. He won the 2020 World Series with the Dodgers.

Justin Turner was born in Long Beach, California, to John and Betsy Turner. He has one younger sister.

He attended California State University, Fullerton, where he majored in kinesiology and played college baseball for the *ans. He earned freshman All-American honors from Baseball America in 2003 after quickly taking over as the starting second baseman. He was named to the 2003 College World Series all-tournament team as a shortstop. During the CWS, Turner was hit in the face by a fastball after going 3-for-3 including a home run. The next year, Cal State Fullerton won a two-game final over Texas in the 2004 College World Series. In 2005, he played collegiate summer baseball in the Cape Cod Baseball League for the Yarmouth-Dennis Red Sox.

Turner reported to the Reds' Rookie League affiliate, the Billings Mustangs, where he saw time at all four infield positions and in the outfield, finishing the season with a team-leading .338 batting average and a .921 OPS. He was promoted to Double-A Chattanooga within two years, finishing the 2008 season, at age 23, with a .289 average and a .792 OPS at that level.

On December 9, 2008, during the Winter Meetings, Turner was traded along with utility player Ryan Freel and infielder Brandon Waring to the Baltimore Orioles, in return for catcher Ramón Hernández. He was invited to spring training as a non-roster invitee; upon its conclusion, he was *igned to Triple-A Norfolk for the 2009 season. Playing mostly second and third base, he finished the year with a .300 average and a .749 OPS.

The Orioles purchased Turner's contract on September 8, 2009. He made his major league debut that day at Fenway Park, pinch hitting for Melvin Mora and finishing the game at third base. Three days later, he got his first major league hit at Yankee Stadium, a single to center field off Michael Dunn. He finished the season 3–18, having appeared in 12 games, three of them starts (all at third base).

Turner was invited to spring training as a member of the 40-man roster, but was demoted to Norfolk at the end of camp. However, on April 12, 2010, the Orioles placed starting second baseman Brian Roberts on the 15-day injured list and recalled Turner from Norfolk. On May 21, 2010, Turner was designated for *ignment by the Baltimore Orioles. In 17 games with the Orioles, he hit .111 (3 hits in 27 at-bats).

Turner with the 2011 New York Mets

On May 25, 2010, Turner was claimed off waivers from the Orioles by the New York Mets and optioned to Triple-A Buffalo. On June 16, Turner was called up to the Mets, with Nick Evans being sent down to Buffalo.

After designating Brad Emaus for *ignment on April 19, 2011, the Mets called Turner back up. He hit his first major league home run against the Houston Astros on May 15, 2011, off Aneury Rodriguez. A three-run home run, it capped off a 5-RBI day for Turner. On May 21, in a Subway Series game at Yankee Stadium, Turner collected an RBI in his 7th consecutive game, setting a Mets rookie record for most consecutive games with an RBI. With this record and other impressive stats, Turner was named the NL Rookie of the Month for May 2011. He was the first Met to win the award since its creation in 2001.

In 2012, the Mets converted him to an all-around utility infielder but on May 6, 2012, when shortstop Ruben Tejada went on the injured list Turner began platooning at shortstop with Jordany Valdespin until Tejada returned.

Following his release from the Mets, Turner had not yet found a new employer when Los Angeles Dodgers bench coach Tim Wallach saw Turner hitting at a Cal State Fullerton Alumni game. Turner signed a minor league contract with the Dodgers on February 5, 2014, with an invitation to spring training. His contract was purchased by the Dodgers on March 16 and he was added to the Major League roster.

Turner had a breakout season in 2014, playing 109 games due to his versatility and injuries to both Hanley Ramírez and Juan Uribe. Turner led the team with a .340 batting average, hitting 7 home runs with 43 RBI in 288 at bats.

On January 16, 2015, he signed a one-year, $2.5 million contract with the Dodgers, avoiding salary arbitration. He became the starting third baseman for much of the 2015 season and hit .294 with a career high 16 homers and 60 RBI.

In the 2015 National League Division Series against his former team, the Mets, Turner led the Dodgers with 10 hits in 19 ABs for a .526 average, with an LDS record 6 of those hits being doubles. The Dodgers, however, went on to lose the series. After the post-season, he underwent arthroscopic surgery on his left knee. He signed a new one year, $5.1 million, contract with the Dodgers in order to avoid salary arbitration in January 2016.

Turner before Game 5 of the 2016 National League Division Series

On December 23, 2016, the Dodgers signed Turner to a four-year contract valued at $64 million. Turner started the 2017 season batting .379 before going on the injured list with a strained right hamstring, which kept him out of action from May 18 through June 9. On July 6, he won the All-Star Final Vote, earning a spot in the 2017 Major League Baseball All-Star Game with 20.8 million votes, a Final Vote record. Turner finished the season with a .322 batting average, a .415 on-base percentage, 21 home runs, and 71 RBI, finishing third in the NL in batting average and second in on-base percentage. In the 2017 NLDS, he had six hits in 13 at-bats (.462 average), including a winning home run in the ninth inning of Game 2 against the Chicago Cubs. Turner and Chris Taylor were selected as the co-MVPs of the 2017 National League Championship Series, where he batted .333 with two home runs and seven RBI. However, in the 2017 World Series, he had only four hits in 25 at-bats, for a .160 average as the Dodgers lost to the Houston Astros in seven games. Turner broke Dusty Baker's franchise record for most RBI in a single post-season when he drove in his 14th run in Game One of the World Series.

Turner was hit by a pitch on his left wrist during a spring training game on March 19, 2018. He suffered a non-displaced fracture, which did not require surgery but put him on the injured list to begin the season. He did not rejoin the Dodgers until May 15. Turner also missed time following the All-Star break, but rebounded in August and September. He was voted the National League Player of the Month for August after batting .402 (39-for-97) with 22 runs, 11 doubles, 1 triple, 6 home runs, 20 RBIs and a stolen base across 25 August games. On September 4, 2018, Turner was named the Los Angeles Dodgers' 2018 nominee for the Roberto Clemente Award, an annual award given to the player who "best exemplifies the game of baseball, sportsmanship, and community involvement." In 202 at-bats after the All-Star break, Turner hit .356 with a 1.066 OPS, 24 doubles and 9 home runs. Turner would finish the season with a .312 batting average, 14 home runs and 52 RBIs. Turner's hot streak continued in the 2018 NLDS, where he reached base in 9 of 18 plate appearances. He went on to hit .333 (8-for-24) in the 2018 World Series, which his team lost to the Boston Red Sox.

Turner hit a career-high three home runs and drove in six runs against the Atlanta Braves on May 8 in a 9–0 win. On June 14, he hit his 100th career home run off of Kyle Hendricks in a 5–3 win against the Chicago Cubs.

The 2020 season was delayed by the COVID-19 pandemic, shortening the season to only 60 games. On Opening Day, Turner was hit with a pitch for the 73rd time as a Dodger, tying the franchise record set by Zack Wheat. He broke that record on August 5 in San Diego. He was hampered during the season by a hamstring strain that caused him to miss two weeks of the shortened season.

He played in 42 games for the Dodgers, hitting .307/.400/.460 with four homers and 23 RBIs. He was voted by his teammates as the winner of the Roy Campanella Award, the first three-time winner in franchise history. Turner was hitless in eight at-bats in the first round playoff series. In the third game of the 2020 National League Division Series, Turner moved past Steve Garvey for the most playoff hits in Dodgers franchise history with his 64th. He had two hits and two RBI in 10 at-bats in the series. Turner had seven hits, including a home run, in 25 at-bats in the 2020 National League Championship Series and advanced to play in his third World Series.

In the 2020 World Series against the Tampa Bay Rays, Turner had eight hits (including two home runs) in 25 at-bats as the Dodgers won the championship. During the 8th inning of Game 6, he was pulled from the game because he had tested positive for COVID-19, before returning to the field to take the official celebratory photo with his teammates and staff, in violation of MLB protocols, leading to criticism from many in the media. Turner apologized for his actions a few days later.

On August 29, 2021, Turner made his pitching debut in the 9th inning of the Dodgers' 5–0 loss to the Colorado Rockies. He threw 10 pitches (his fastest was 76:mph) for all 3 outs, gave up 0 runs, and exited the game to a standing ovation. In 2021, he played in 151 games with a .278 batting average, 27 home runs and 87 RBI. Turner struggled in the postseason, with only four hits in 38 at-bats (one home run) in the Wild Card, NLDS and NLCS. He strained his hamstring while running to first base in Game 4 of the NLCS and was ruled out of appearing in any future playoff games in 2021.

In 2022, Turner split his time between third base and designated hitter, appearing in 128 games and batting .278 with 13 homers and 81 RBIs. He had the slowest sprint speed of any major league third baseman, at 25.0 feet per second. On November 10, the Dodgers declined his $16 million option for the 2023 season, making him a free agent.

Turner married longtime girlfriend Kourtney Pogue in December 2017. His wedding, which took place at a beachfront resort in Mexico, was officiated by Orel Hershiser, former Dodger pitcher and current color commentator and *yst for the Dodgers on SportsNet LA. Turner and his wife reside in Studio City, Los Angeles.

Description above from the Wikipedia article Justin Turner, licensed under CC-BY-SA, full list of contributors on Wikipedia. 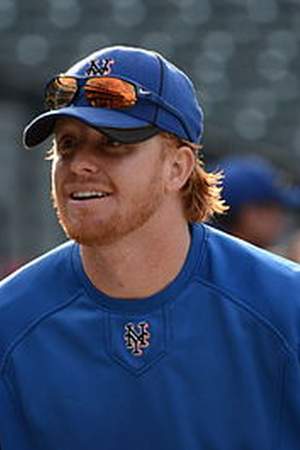