Icelandic bishop (1052–1121)This is an Icelandic name. The last name is patronymic, not a family name; this person is referred to by the given name Jón.

Jón Ögmundsson or Ogmundarson (Latin: Ioannes Ögmundi filius; 1052–23 April 1121), also known as John of Holar and Jon Helgi Ogmundarson, was an Icelandic bishop and local Icelandic saint. In 1106, the second Icelandic diocese, Hólar, was created in the north of Iceland, and Jón was appointed its first bishop. He served as bishop there until his death.

A religious purist, Jón made it his mission to uproot all remnants of paganism. This included changing the names of the days of the week. Thus Óðinsdagr, "day of Odin", became miðvikudagr, "mid-week day" and the days of Týr and Thor became the prosaic "third day" and "fifth day".

Jón's names for the days are still in use in Iceland today but despite the success of this cosmetic reform it appears that Jón did not manage to uproot the memory of the heathen gods. More than a century after his death the Prose Edda and Poetic Edda were written, preserving large amounts of pagan myth and poetry.

Jón's relic was translated to the cathedral of Hólar on 3 March 1200, a process called "translation" which made him a local saint. His feast day, 23 April (the date of his death) was decreed a Holy Day of Obligation for all Iceland at the Althing in the summer of 1200. These two events are distinguished in the Icelandic annals: Jón was not 'made a saint' by the Althing.

Jón never received as much veneration as the first Icelandic saint, Thorlak Thorhallsson. He was venerated primarily in the diocese of Hólar, and also at his birthplace, Breiðabólstaður in Fljótshlíð; relics were preserved at both these places.

A Latin life (vita) about St. Jón was probably written by the monk Gunnlaugr Leifsson of the monastery at Þingeyrar in the early thirteenth century. Composed nearly a century after Jón's lifetime, its historical value is dubious. It is a cl*ic example of hagiography for a confessor saint, aiming to praise the saintly virtues of its subject rather than record accurate historical information. The Latin original has not survived, but it was translated into Icelandic shortly after its composition and revised on subsequent occasions.

Description above from the Wikipedia article Jón Ögmundsson, licensed under CC-BY-SA, full list of contributors on Wikipedia. 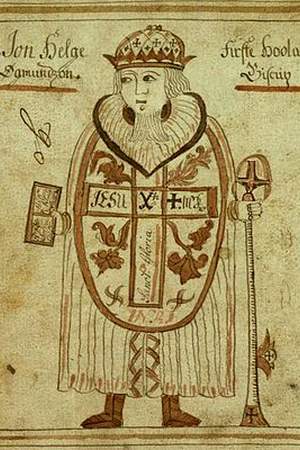