Jaime García Cruz was a Spanish horse rider who competed in the 1948 Summer Olympics and in the 1952 Summer Olympics. In 1948 he and his horse Bizarro won the silver medal as part of the Spain jumping team in the team jumping competition after finishing fifth in the individual jumping competition. Four years later he and his horse Quórum finished tenth as part of the Spanish team in the team jumping event after finishing 17th in the individual jumping.
Read full biography

Other facts about Jaime García

Jaime García Is A Member Of 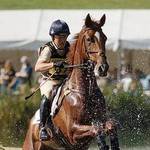