McDonald was born in Detroit, Michigan, and was educated in White Lake Township and Detroit. He attended Wayne State University and served as supervisor of census for Wayne County with the Bureau of the Census in 1960. He was elected supervisor of Redford Township in 1961 and 1963, reelected in 1964. He was elected chairman of the Wayne County Board of Supervisors in 1965. He was appointed to Republican Task Force on Urban Affairs in 1967.

In 1966, he was the Republican Party candidate in Michigan's 19th congressional district. He defeated in*bent Democrat Billie S. Farnum, one of the "Five Fluke Freshmen", to be elected to the 90th Congress and to the two succeeding Congresses, serving from January 3, 1967 to January 3, 1973. In 1972, after redistricting, he ran in the same district as veteran Republican Representative William S. Broomfield. McDonald lost to Broomfield in the Republican primary elections.

After leaving Congress, he became a consultant and lobbyist with law firm Verner, Liipfert, Bernhard, McPherson and Hand. He was a resident of Outer Banks, North Carolina.

Description above from the Wikipedia article Jack H. McDonald, licensed under CC-BY-SA, full list of contributors on Wikipedia. 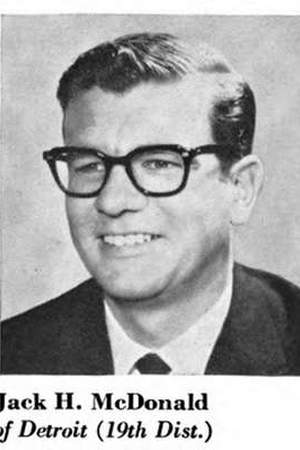