Ingvald Olsen Eidsheim DSO, DSC (born 27 November 1909 in Hosanger, died 23 February 2000) was a Norwegian sailor and war hero. He joined the Shetland bus as the commander of Hitra. He conducted 43 trips to Norway.

After the war he worked as a civilian until he rejoined the Royal Norwegian Navy in 1948 and amongst other *ignments commanded the Norwegian Royal Yacht Norge.

From 1950 he served on the Central Defence Command Staff and eventually headed the Norwegian Home Guard staff. Following his retirement he committed himself to the restoration of his old ship Hitra.

On 25 August 2007 Eidsheim was honoured with a monument on the pier of Eknesvågen, Lindås. The monument was made by sculptor Arne Mæland and dedicated by Minister of Defence Anne-Grete Strøm-Erichsen.

Description above from the Wikipedia article Ingvald Eidsheim, licensed under CC-BY-SA, full list of contributors on Wikipedia. 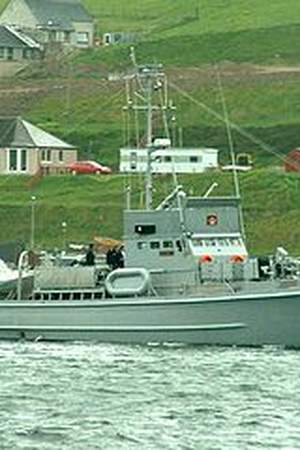