David M. McDowell is a psychiatrist author and creative consultant. He co-founded the Substance Treatment and Research Service at Columbia University and served as its medical director. He also founded Columbia's Buprenorphine Program the first such treatment program for opiate addiction in the United States which according to the New York Times had an 88% success rate.
Read full biography

Other facts about David McDowell

David McDowell Is A Member Of 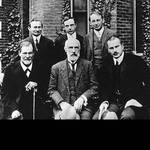