Conley's career spanned fifty years, but she was best known for her performances in daytime television, and in particular, for her portrayal of larger-than-life fashion industrialist Sally Spectra on The Bold and the Beautiful. Conley played the role from 1989 until her death eighteen years later. Darlene's character Sally is the only soap opera character to be displayed at Madame Tussaud's wax figures galleries in Amsterdam and Las Vegas.

Conley, an Irish American, was born south of Chicago in Chicago Heights, Illinois, the daughter of Melba (née Manthey) and Raymond Conley. In the late 1950s and early 1960s, Conley was employed with the traveling theater group the Chicago Uptown Circuit Players and Playwrights Company. She earned a bit part in the movie The Birds, which was followed by similar small roles in movies like Valley of the Dolls and Lady Sings the Blues. Darlene also appeared in the first episode of the fifth season of The Mary Tyler Moore Show as a prison warden. Darlene appeared on Little House on the Prairie in 1981, in the episode en*led "A Wiser Heart."

Darlene's performance as Rose DeVille on The Young and the Restless followed, with Conley playing many small roles on other soaps for most of the 1980s. She was the tough but basically decent prison warden Edith Hopkins on Days of Our Lives in 1983 during Liz Chandler's incarceration for Marie Horton's shooting. As Trixie on General Hospital from 1984 to 1988, she was an old hooker pal of Ruby's who worked at Kelly's. An encore as Rose De Ville inspired William J. Bell to cast her as flamboyant fashion maven Sally Spectra on his newer serial, The Bold and the Beautiful. She earned two Outstanding Supporting Actress Daytime Emmy nominations.

Conley became ill in 2004 due to a fall that broke several bones. She recovered from the fall and returned to work (although she was usually seated during her scenes).

Reports surfaced in the media in the fall of 2006 that Conley had surgery and received treatment for stomach cancer. Conley died on January 14, 2007. B&B featured a tribute to Conley; John McCook presented the tribute, which featured her memorable moments on the show.

The show has kept the role of Sally Spectra alive. Sally's absence has been explained by having her son CJ tell his father, Clarke (and viewers), that Sally had taken a permanent vacation in St. Tropez. In late 2007, Sally decided to sell her fashion house. Nick Marone and Jackie Marone bought Spectra and ran the company; in a later story in 2017, the show revisited many of the storylines of Sally Spectra to introduce a new younger character, also named Sally, who is the niece of the original Sally Spectra. The younger Spectra relaunched the house of Spectra fashion line. In addition, the show brought back the character of CJ to appear in several episodes.

Description above from the Wikipedia article Darlene Conley, licensed under CC-BY-SA, full list of contributors on Wikipedia. 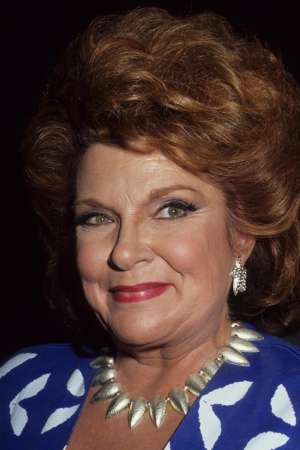