Robert Lee Pet* Jr. (born December 12, 1932) is an American former professional basketball player. He played 11 seasons in the NBA, all with the Milwaukee/St. Louis Hawks (1954–1965). In 1956, he became the first recipient of the NBA's Most Valuable Player Award and he won the award again in 1959. He also won the NBA All-Star Game MVP award four times.

The first NBA player to score more than 20,000 points, Pet* was inducted into the Naismith Memorial Basketball Hall of Fame in 1970. He is one of four players who was named to all four NBA anniversary teams. He is widely regarded as one of the greatest power forwards of all time.

Pet*'s basketball career had humble beginnings, as at Baton Rouge High School, he was cut from the varsity basketball team as both a freshman and sop*re. He played church league basketball as a sop*re and grew five inches in less than a year. His father, sheriff of East Baton Rouge Parish (1932–1936), pushed him to practice in the backyard of the Kemmerly house until he improved his skills. It worked: Pet* became a starter and made the All-City prep team as a junior. As a 6-7 senior, he led Baton Rouge High to its first state championship in over 20 years. Pet* was then selected to play in a North–South all-star game at Murray, Kentucky.

After high school, Pet* had scholarship offers from 14 universities and accepted a scholarship to play at nearby Louisiana State University (LSU). He was a three-time All-Southeastern Conference selection and a two-time All-American as a member of the LSU men's basketball team. (Freshmen were not allowed to play varsity basketball in those days.) During those three years, Pet* averaged 27.8 points per game. He was also a member of the Zeta Zeta Chapter of Delta Kappa Epsilon at LSU.

Pet* made his varsity debut at LSU in 1952. He led the SEC in scoring for his first of three consecutive seasons, averaging 25.5 points per game. He ranked third in the nation in scoring and also averaged 13.1 rebounds per game, helping his team to a 17-7 win–loss record for a second-place finish in the league, and was selected to the All-SEC team.

During his junior year, Pet* helped the Tigers sail through a 23-game regular-season schedule with only one loss (to Tulsa). A clean sweep of SEC Conference opponents became LSU's second SEC *le (their first came in 1935) and the school's first NCAA Final Four. He averaged 24.9 points and 13.9 rebounds per game for the 1953 season. He was honored with selections to both the All-SEC and All-American teams.

Pet* averaged 31.4 points and 17.3 rebounds per game during his senior year and once again led LSU to an SEC Championship and garnered All-SEC and All-American honors. He set a then-SEC scoring record of 60 points against Louisiana College in his second game, and also the SEC record for scoring average, with both records being broken by Pete Maravich. Pet* also was the second player in major-college basketball history to average more than 30 points a game.

In 1954, his number 50 was retired at LSU. He was the first Tiger athlete in any sport to receive this distinction. In 1999, he was named Living Legend for LSU at the SEC Basketball Tournament. He is a member of the LSU Hall of Fame. Bob Pet* Boulevard in Baton Rouge, Louisiana is named after him.

In 1954, the Milwaukee Hawks selected Pet* second in the first round of the NBA Draft after the Baltimore Bullets' selection of Frank Selvy. With $100 in the bank, he signed a contract with Hawks owner Ben Kerner for $11,000 – an all-time high for an NBA rookie then. Pet*'s awkward ballhandling and a lack of strength to battle NBA bruisers weighing 200 pounds that early in his career, had Hawks coach Red Holzman move him from center, his position at LSU, to forward in his first training camp. "In college I played the standing pivot", he said in a April 1957 issue of SPORT magazine interview. "My back was to the basket. In the pros, I'm always outside. Everything I do is facing the basket now. That was my chief difficulty in adjusting, the fact that I had never played forward before." Though many were skeptical about Pet* making the transition from college to the rough-and-tumble NBA, in 1955 he won the NBA Rookie of the Year Award after averaging 20.4 points and 13.8 rebounds per game. He became the second rookie to win all-NBA honors but the team finished last in the Western Division. After the season, the Hawks moved to St. Louis.

He helped the Hawks improve during their first year in St. Louis by winning 33 games during 1955–56. In his second season, Pet* adjusted his game so that he would get to the free-throw line for easy points for his team and foul trouble for his opponents. Being a phenomenal offensive rebounder and an instinctive scorer, he told basketball historian Terry Pluto that "Offensive rebounds were worth eight to 12 points a night to me. Then I'd get another eight to 10 at the free-throw line. All I had to do was make a few jump shots and I was on my way to a good night." Pet* won his first scoring *le with a 25.7 average, and led the league in rebounding (1164 for a 16.2 average). He was also named MVP of the 1956 NBA All-Star Game after scoring 20 points with 24 rebounds and 7 *ists; he would win subsequent MVP All-Star Game honors in 1958, 1959, and 1962. He also won his first of two NBA regular season MVP awards (the other was in 1959).

Retooling before the 1956–57 season, the Hawks acquired Ed Macauley and rookie Cliff Hagan from the Boston Celtics for the draft rights to Bill Russell. The team added guard Slater Martin in an early-season deal with the New York Knicks while Alex Hannum arrived a few weeks later after being released by the Fort Wayne Pistons. Hannum became the team's third coach that season by taking over as player-coach with 31 games left on the schedule. Though they posted a 34-38 record in 1956–57, a series of tie-breaking playoff games against the Pistons and a three-game sweep of the Minneapolis Lakers had them in the NBA Finals. In Game 1 of the 1957 NBA Finals at the Boston Garden, Pet* scored 37 points as the Hawks shocked the Bill Russell-led Boston Celtics in double overtime. Pet* won his team the third game in the series with a late basket in St. Louis. His two free throws with six seconds left in Game 7 forced overtime, but Pet*'s 39 points and 19 rebounds in 56 minutes weren't enough to win a double-overtime game. Pet* averaged 29.8 points and 16.8 rebounds per game during their 1957 playoff run.

Pet* as a member of the Hawks

A franchise-record 41 wins and a division crown allowed the Hawks to get back at the Celtics in the 1958 NBA Finals. Pet* led the Hawks to an NBA Championship with a then-playoff record 50 points in the Hawks' 110-109 series-clinching victory in game 6. Pet*’s 50 points stood alone as the most in a Finals close-out victory until it was matched by Giannis Antetokounmpo in 2021. Both teams would later meet in the 1960 and 1961 Finals, with Boston winning each time. For the season, Pet* scored 24.6 ppg and pulled down 17.4 rpg, and earned All-Star Game MVP honors with a performance that included 28 points and 26 rebounds. St. Louis finished at the top of the Western Division in each of the next three seasons. Pet*'s league-leading scoring average of 29.2 points per game in the 1958–59 season was an NBA record at the time, and he was named the Sporting News NBA MVP.

In the 1960–61 season, Pet* averaged 27.9 points per game and pulled down 20.3 rebounds per game, making him one of only five players to ever break the 20 rpg barrier. He, along with Wilt Chamberlain and Jerry Lucas, are the only three people who averaged more than twenty points and twenty rebounds in an NBA season. On February 18, 1961, Pet* scored a career-high 57 points and grabbed 28 rebounds in a 141-138 win over the Detroit Pistons.

In the following season, he scored a career-best 31.1 points per game, but the Hawks slipped to fourth place. After missing 30 games because of injuries, Pet* ended his career in 1965 still near the peak of his game. He was the first NBA player to eclipse the 20,000 points mark (20,880 for a 26.4 average). Of the 20,880 points he scored in the NBA, 6,182 of them (nearly 30 percent) came from free throws. His 12,849 rebounds were second-most in league history at the time he retired, and his 16.2 rebounds per game career average remains third only to Wilt Chamberlain and Bill Russell.

In 1970, Pe* was inducted into the Naismith Memorial Basketball Hall of Fame. He is one of four players who was named to all four NBA anniversary teams (25th, 35th, 50th, 75th), along with Bob Cousy, George Mikan, and Bill Russell.

He was married to his wife Carole, who died in 2010, and has three children and 10 grandchildren.

Description above from the Wikipedia article Bob Pettit, licensed under CC-BY-SA, full list of contributors on Wikipedia. 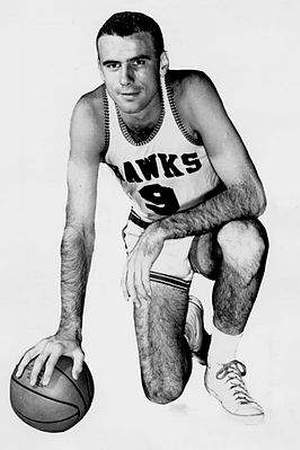